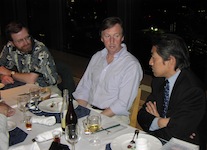 LimeBridge was formed in 2002 by Peter Massey, Bill Price and Osamu Taniguchi, the latter two having worked for Amazon in the US and Japan. It was extended to 10 countries and for a decade ran two unconferences per annum around the world, sharing best practices and supporting external events for the host country. A kind of “Travelling Wilberries” – leading experts in their own right working together on behalf of global clients. Each country was independently owned, some borrowing the LimeBridge + country name. In 2014, Activeo in France bought stakes in Celtycs in India and in April 2017, Budd in the UK. Driva in the US was closed down in 2016 when Bill went to work for a data analytics company. Today, the former LimeBridge principals stay on close drinking terms as they travel to see their growing kids spread out all over the world. They share stages and information – and even work together from time to time!